The idea of a hydro hammock is an interesting thing. But…

Which is more relaxing: soaking in a hot tub or swinging in a hammock in the countryside? It’s a hard choice, especially if you prefer to spend time in nature. But suppose you could combine these two experiences?

One day in 2015, the inventor Benjamin H. Frederick decided to make his dream a reality and began developing a project called The Hydro Hammock. His concept got a lot of attention from luxury lovers, but the road from idea to the product was not a straight one.

The idea of ​​creating a Hydro Hammock seemed successful, but the developer did not have the opportunity for further production. The project was published on Kickstarter, which managed to raise some funding. A prototype was made for advertising purposes, and an engaged audience did appear. But it turned out that the inventor was mistaken in his estimates about the cost of the final product and the Hydro Hammock was not released. As a result, many frustrated customers were trying to get their money back.

It appears the main refrain we have from buyers is the cost and insufficient culture around the product…Benjamin Frederick, the inventor of Hydro Hammock

The makers of The Hydro Hammock announced on their Facebook page that they plan to restart the company. However, in order to enter the market again, they need to find better financial support and start developing a more affordable product.

Although this project was innovative, it is not particularly different from the inflatable hot tubs, which can be a good option if you like this kind of recreation. Bear in mind that this kind of model not only lets you stay in warm water in the open air, even at a low temperature but also offers several other bonuses — for example, a hydromassage.

Each inflatable hot tub comes with a range of features and accessories included in the price. In general, they include the following: a water heating system, an insulated earthing mat, an Air Jet system, a spa pump, a leatherette top cover, drinks tray, side grab handles, a spare filter cartridge, chemical floater, a repair kit, and an owner’s DVD. All of this means that your inflatable hot tub comes with everything you need so you can enjoy it right out of the box.

It is the most spacious hot tub for 5-6 people in which the heating and the jets can work simultaneously. And a built-in water softener is a big bonus if you have hard water in your region (read research)

An inflatable hot tub with real hydro jets, not air jets like those present in most inflatable hot tubs. It provides a quality strong massage, but at a much lower price than a stationary hot tub (read research)

(equivalent to Coleman SaluSpa)
The best choice at an affordable price for family use or for parties. Thanks to its square shape, it is more spacious than a round spa, and it is more comfortable to sit in (read research)

It’s the best for couples, the original shape is not only designed well but also makes it very comfy to soak together. You can sit side by side or opposite without bending your legs (read research)

As for price, inflatable models are usually two times cheaper than jacuzzis, and in addition, this type of hot tub is a mobile unit that you can take anywhere. It’s also very easy to install, which allows you to put it not only in your backyard or deck but also in the basement or on a terrace.

Is Hydro Hammock a hammock, is it a tub?

Although essentially a hammock, the Hydro Hammock is intended to also be used as a hanging pool, a hot tub, or а summer shower. You could even dig a hole in the ground to build a temporary hot tub right in the sand (or in the snow) by securing the hammock within the hole.

The Hydro Hammock is made of a sealed synthetic fabric with high tensile strength, which allows you to fill it with approximately fifty gallons of water. And it’s so roomy that two or three people can easily get into it.

Along with the hammock, the kit includes all the required installation tools and parts, such as mounting straps and carabiners. However, you will need to buy a portable water heater. This piece of equipment is quite heavy, so it’s not ideal for hiking. The heater does come in a case with two wheels and an extendable handle, though, which makes it easy to use at a campsite.

The water heating system runs on gas, and has a 12-volt pump to circulate the water. The system heats the pressurized water, which can be added using a garden hose. You can also fill the water from a stream or a lake, and enjoy the hot water in the hammock wherever you are. Alternatively, simply allow the heater to swirl the water in the hammock, heating it to a comfortable temperature.

Why you would love it

How much does the Hydro Hammock cost?

The Hydro Hammock itself is relatively inexpensive. Considering the price set by the developer, it would cost you only $260. However, if you want to heat water in a hammock, you have to spend an extra $920 for a portable heating system.

In general, the idea is interesting, but I do not think that it would be able to win an audience. It does not look safe. Personally, even the usual “dry” hot tub, not to mention the hammock that looked like a hot tub, was a problem for me … I never managed to get into it with the first attempt. According to the description, you can take a shower for two hours. It turns out that the heater’s power is enough only for this time. But for a hot tub, especially if there can be several people, this is very poor. I do not see anything in it that would be better than the inflatable hot tub. As for me, this hydro hammock has more headaches than real profits.Peter Rossi, bespoke hot tub designer, ex-Head of Product at Jacuzzi Group

Hello! I am super excited about this project and I wanted to make sure I haven’t missed anything. Survey emails have not gone out yet, correct? Thank you for your ideas which have been brilliant. Be well and travel safely to you and your family.Julianna Hagelauer
Is it just me or is the shipping a month or two late now? Any updates?Michael
Another Month has passed.. But i haven’t received anything. What’s the Status now?Rolf Koch
Benjamin, since you do not reply to personal mails anymore, I’ll put my question here: can I still agree to your offer to be refunded? I don’t think you will ever ship a hammock to any of the backers, so a refund would be fair.Arno Lambert
I’m a backer from the start. I’m sorry but I feel 3 years is just too long to wait anymore, that money could have been collecting interest all these years! I would like my refund before the end of this year, Thank You.Margaret Ringnalda
Benjamin, we’ve been patient and understanding of your situation but enough is enough. Stop lying to us.Josh Gallo
So is there any chance of a product being shipped or what? Just morbidly curious at this point… four years later…Jerry Napleton

Each inflatable hot tub works from an ordinary electrical outlet but, if you plan to take it with you to the campsite, then you should think about a backup power source. Portable generators are great for this. There are many models on the market, which use different fuels and have varying capacities. They can also serve as the main source of energy if it’s not possible to connect to a centralized power grid. If you’re at the summer cottage, getting the necessary electricity won’t be an issue.

How to choose a generator

When choosing a generator, there are three main considerations: fuel consumption, power output, and cost. You’ll need to estimate how long you’ll be using the generator for each time you start it up, how much fuel it consumes per hour, and whether this is offset by buying a cheaper or more expensive model. You’ll also want to look at the generator’s safety features, such as overload prevention, automatic shut off, idle power, and so on.

Which generator is best?

Gas-powered generators are the most suitable for a short-term power supply or for small private cottages. Gasoline generators have some advantages compared to diesel or propane. They cost less, and have readily available models with a power of less than 4 kW. On the downside, these generators have a very short service interval (about 100 hours), a high fuel consumption, and the smallest motors (which limits the length of time you can use them).

Dual-fuel generators, on the other hand, are much more economical to use. This hybrid has the best motor and service interval, as compared to gasoline or diesel units. You might also find it more practical to buy a propane generator, due to the lower fuel price. Additionally, propane generators produce a lower toxic content in the exhaust gases.

The idea of a hydro hammock is an interesting thing. But, even if Benjamin Frederick is able to restart production, the overall benefits remain doubtful. So, if you decide to treat yourself with a hydromassage in a hot tub, choose proven products that leave only a delightful experience.

❓ What is a Hydro Hammock?

A Hydro Hammock is a portable hanging pool, hot tub, or summer shower. You can take it anywhere and install it quite easily. Although this sounds very promising, there are some disadvantages too that include instability and heater inconvenience. We considered both the pros and cons of a Hydro Hammock in our article.

🦾 How does a Hydro Hammock work?

A Hydro Hammock is portable, but you need to attach it to something sturdy like trees or pillars. It needs to have a hose with holes that helps to circulate the water. To heat the water, you would need a portable heating system.

💵 How much does a Hydro Hammock cost?

A Hydro Hammock isn’t expensive and you can purchase one for around $260. However, to ensure that you have a comfortable water temperature, you would need to spend approximately $920 on top of the heating system.

🤔 What is an alternative to a Hydro Hammock?

🤷‍♂️ Does a Hydro Hammock have jets?

🔥 How does a Hydro Hammock heat up?

You would need a portable heating system to maintain comfortable water temperature in the Hydro Hammock.

To get exclusive hot tub deals, discounts, and advice

ByRossi is reader-supported. When you buy using links on our site, we may earn an affiliate commission at no extra cost to you. The editorial staff has no affiliate incentives so our advice is still unbiased and brutally honest. Learn more 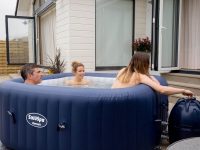 Bestway SaluSpa Hawaii – Not Worth The Money?

Inflatable hot tubs can offer a spa worthy experience at home. Read on to learn how the Bestway SaluSpa Hawaii Hot Tub is worth the investment!
byPeter Rossi 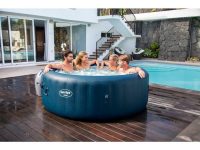 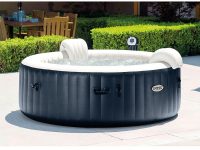 Invest in the best hot tubs, save money and effort. Read our expert review to discover the worst hot tub brands and top alternatives based on expert reviews.
byPeter Rossi 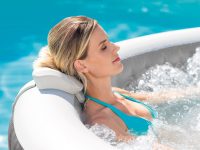 Have you decided to buy the Intex PureSpa model but do not know which one to choose? We help by explaining their differences.
byPeter Rossi
Do NOT follow this link or you will be banned from the site!